days to plan the site

As Director of Emergency Management for Missouri’s Audrain County, Nicholas Tietsort has dealt with new challenges during the COVID-19 pandemic. Along with having to coordinate the work of multiple departments in a virtual setting, the county faced a crisis of public health on an unprecedented scale.

After the county’s outbreak of cases in December 2020, he learned the state would be sending over two thousand vaccine doses for a January clinic. The county was only given four days to plan this mass vaccination event between twenty groups including local and state government, health professionals and venue staff. The stakes for a successful event were high, with each possible vaccine delivered contributing to the protection of the county’s approximately 26,000 citizens.

Using EagleView’s high-resolution oblique imagery, Nicholas designed a vaccination plan that would allow separate groups to move through the line without traffic jams.

"We’ve moved a mountain on behalf of the state of Missouri and we’re proud of that." 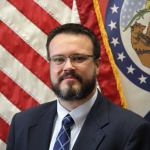 “With how easily COVID-19 is spread, the health department wanted to make sure people weren’t in a confined area,” Nicholas said. “They wanted screening sites and the ability to move cars in a Y pattern, so you could move cars to one area to wait while other cars could move down the line.”

To follow necessary distancing measures and still serve as many people as possible, the venue had to be outdoors. Nicholas shared that nothing on this scale had needed to be organized before -- while concerts and festivals can have several thousand people in a weekend, the arrival and departure of cars is much more spread out than a drive-through vaccination site. As an added factor, one of the sites had recent construction taking up part of the lot. It didn’t show up on free imagery tools, and scheduling a drone pilot to map the site would have been nearly impossible on such short notice.

“We only had four days of actual planning,” Nicholas said. “You’d have to get the FAA permissions for a drone to fly over the site, then you’d have to get a crew that would be willing to do that in that amount of time and actually give us multiple angles and views. It would have been next to impossible.”

Complicating this process, people who receive the vaccine must undergo a required observation period for possible allergic reactions. While most people are observed for 15 minutes, those who have had previous reactions to vaccines or other potential health risks may need to be watched for 30 minutes to an hour. Directing cars from the entrance, to point of contact, to observation and then exit requires a lot of moving around to prevent traffic jams.

Audrain County’s Assessor’s Office has partnered with EagleView since 2012, so the Emergency Management Agency was able to request access to the county’s EagleView imagery. Cross-agency adoption is one way for counties to increase the return on their investment.

”Not only did the imagery include multiple angles of the site, it was recent enough to show where construction was happening. Members of the planning team could draw maps over the imagery to quickly communicate their strategy in virtual meetings.

“I could share my screen and immediately get someone’s input and draw, delete, do whatever I needed to see what their vision was,” said Nicholas. “Then I could put that on paper and have that in a finalized form before the meeting ended.”

Creating the plan this way was so efficient, they could even create multiple versions of the plan for the health director to review and place his final judgement. Finished maps were then printed out and included in the Incident Action Plan for all members of the team, creating a single point of reference on the day of the event. Nicholas felt this ease of communication was a major advantage of using EagleView.

“This was the first time the new health director had seen the way we mapped everything, and he was highly impressed,” he said. “He really liked that you could see multiple angles of how the site was set up so you could more effectively gauge where resources would go.”

days to plan the site

With maps drawn on EagleView imagery of the site, Audrain County held their first vaccination event at an airport that could hold 1300 vehicles at a time, most of which came with two people. Over the full course of the day, they were able to vaccinate the occupants of 1500 cars.

Audrain County used this successful traffic flow pattern at a second clinic that served over 2100 persons and is currently planning a third event with equal capacity. Nicholas was even called in to help a neighboring county plan their own vaccination site.

"I think the best part about this process is getting close to the folks in our region and making sure we all have each other’s back,” Nicholas said. “The smoother the events go, it’s better for us, and it’s better for the public because we can get more vaccine out.”

Despite the unique requirements and short timeline, the project managed to be a huge success due to a combination of strategic mapping with EagleView imagery and the coordinated work of twenty groups, both internal and external to local government.

“After everything was done, what I see is such a great collaborative effort,” Nicholas said. “We’ve moved a mountain on behalf of the state of Missouri and we’re proud of that.”