Minimum savings per roof when ordering an EagleView

“I remember when EagleView told me they were going to measure roofs from the sky back in 2008,” said Interstate Roofing CEO and Owner Scott Riopelle with a twinkle in his eye. “I laughed at them.”

This Denver-based innovator, who heads up locations across the country, is always looking to the future by surrounding himself with a team that’s eager to try new things.

But to get to that point, Scott had to bet on himself and take a chance on technology, at a time when the industry wasn’t very keen to make the leap.

"We’ve saved millions over the years by using EagleView, and that’s only looking at the savings of always ordering the correct amount of materials. I can’t even imagine how much it is when you look at the time savings, the additional jobs won and avoiding worker’s compensation costs.” 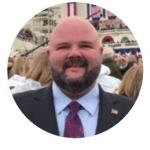 “When I started out, I had sales reps that couldn’t even work a tape measure, let alone measure a roof,” said Scott. “I was wasting tons of money on materials that were over-ordered.”

His temporary solution? In mountainous Denver, Scott hired a bunch of rock climbers and paid them to climb and measure roofs for him. Though he began saving quickly, it was clearly not a viable long-term solution if he wanted to scale the business.

Right around that time, a representative from EagleView pitched Scott on the value of letting aerial imagery coupled with computer vision and machine learning do the work for him. Even though Scott laughed at first, he decided to give it a try.

Since taking that chance on technology in 2009, Interstate has ordered EagleView reports on roughly 90% of their jobs – due to the superior accuracy, consistency, and time/risk savings of not having to send people up on the roof to measure.

“We’ve saved hundreds of thousands on materials alone by using EagleView, simply due to the fact that we’re ordering the right amount every single time,” said Scott. “It’s worth it to spend the money to get accurate information, because it could save the cost of losing a job.”

Scott’s recent recognition as the RT3 Innovator of the Year, which he received based on a blind judging of technological information, is due in large part to his willingness to take risks and make changes to the business. However, for those risks to pay off, the solutions must be catered to Interstate’s specific business model.

The integration between EagleView and JobNimbus is also very important to us, especially because both companies have helped us develop by listening to our needs and tailoring their products to fit them,” said Scott. “The ease of use is especially key.”

“I’ve worked with EagleView on several different initiatives, and I’m so excited to see where the future takes us,” he said. “The sky is truly the limit with their technology, which is so far ahead of anything else on the market.”

Minimum savings per roof when ordering an EagleView

Under Scott’s direction, Interstate has ordered between 20-25,000 EagleView reports – almost always vying for the Premium Report.

Scott estimates a low-ball savings of $100 per roof when ordering an EagleView – and that only takes into account the savings due to accurate material orders. Add in the time saved by not hand-measuring and improved homeowner bids, and that number jumps exponentially.

Even the lowest estimate finds that Interstate has saved between $2 and $2.5 million in just over a decade, thanks to EagleView reports.