inspections per day following a storm

In an industry that has historically been dependent on manual process, many roofing and construction companies have recognized the value of digitizing their workflows to save time and money. Colorado-based HomeGuard Roofing & Restoration is one such company driving technological adoption in its unique regional market and discovering additional value by using EagleView’s objective roof measurements.

"If we weren’t using EagleView, that would definitely be a problem." 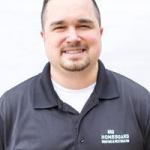 Founded in 2012, HomeGuard has taken a data-driven and technology-focused approach to spur growth. The company’s 38 employees focus almost exclusively on insurance-based claims, which account for nearly 90 percent of HomeGuard’s business. “What makes us unique is our ability to understand the insurance side of things,” said Danny Fix, HomeGuard’s Co-Founder and Director of Sales. “We’ve used some other companies in the past, but we really like EagleView because it speaks to insurance companies.”

In Colorado – where property owners filed the most hail damage claims from State Farm in 2018 – HomeGuard relies on its expertise in storm-related claims and repairs. The incredibly high number of hail-related claims means that the period immediately following a storm can see more than 50 inspections per day. In order to maintain a competitive edge, HomeGuard requires rapid and accurate measurements and pricing estimates to quickly bring prospective customers on board.

HomeGuard has used EagleView Premium Roof Reports ever since its inception seven years ago, a decision that Mr. Fix claims is paramount to growing its customer base.

“If we’re out hand-measuring roofs all the time, it slows us down, and we could lose jobs,” Fix said. “If we weren’t using EagleView, that would definitely be a problem.”

In addition, HomeGuard needs to commit time and resources to liaising and communicating with insurance companies. EagleView’s status in the insurance industry as an unbiased, third-party provider of objective data is key to ensuring this process goes smoothly.

inspections per day following a storm

In its infancy, HomeGuard began ordering EagleView reports on an as-needed basis. As the company continues to expand, the founders know how important those reports have been to help their estimators maintain efficiency – further helping HomeGuard drive growth, decrease tedious manual processes and shave costs during the life of a project.

For example, when the team was tasked with doing a second round of repairs for 30-building complex Dancing Willows, EagleView’s reports helped the company carry out the repairs faster and with stunning accuracy.

“We ordered the reports once and, because we did the same job two years later, we used the same report again,” Danny said. “They were still accurate and ended up working. It was awesome...We don’t look at [an EagleView report] as a major expense – it just helps us save money and be more accurate.”

By using EagleView reports, HomeGuard can focus more on the customer and less on the manual process of measuring roofs, which has enabled them to handle a high volume of clients – critical in today’s fast-paced business world.

“It saves money on the training end, and when we’re negotiating on the back end with insurance,” Fix added. “It’s just kind of common sense.”